58° NORTH is the latitudinal line that links the home places of the three musicians that make up this exciting new folk act; Ewan MacDonald, Alastair Caplin, and Lewis Murray, with a combination of fiddles and mandolin. Between the three of them they have played on some of the UK’s most prestigious stages, including The Royal Albert Hall, Westminster Abbey, The Barbican and The Roundhouse, and played with some of the UK’s finest folk musicians- Alasdair Roberts, The Incredible String Band, Emily Portman, Abigail Washburn, and The Ceilidh Liberation Front..
.
After many evenings spent learning each other’s playing and tunes, the band have melded a sound that bonds together the ancient tradition of Scottish Traditional music with folk music from other European and Scandinavian traditions. The music ranges from the most intimate stringed slow airs to fiery table-thumping sets of reels. 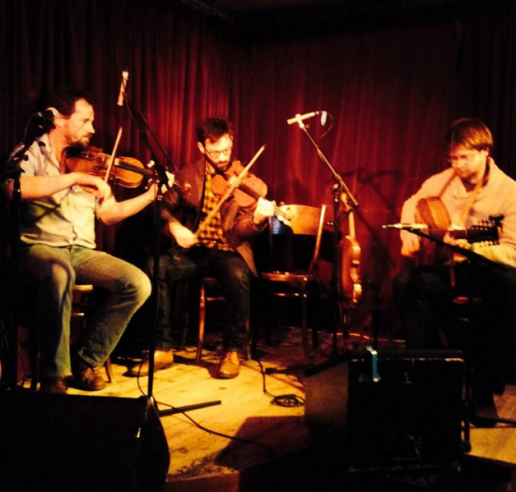 JACK SHARP is the singer and guitarist with successful British psych folk-rock band Wolf People (180,000 Youtube hits and counting!). In his years with the band, he has developed a keen side interest in finding, singing and interpreting folk songs from his home of Bedfordshire, inspired by the music of Nic Jones, Lal Waterson and Peter Bellamy. He’s joined by vocalists Marisa Straccia and Davy Willis to make for a powerful folk trio.
.