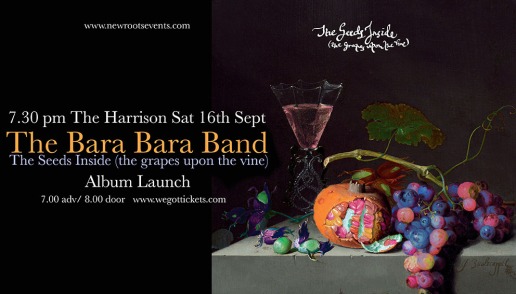 Describing themselves as “an alt-folk quartet drawing promiscuously on old-time Americana, country and 60s psych as well as soaking up influences of traditional English folk music” The Bara Bara Band hail from the old mining town of Church Gresley, South Derbyshire. The band were formed by Ruth Jacob (The Lorcas) and Rupert Browne (Juniper Leaf), and completed by Boris Ming (of Juniper Leaf and The Precious Mings) on fiddle and Will Dobson on percussion. Tonight they launch their second album ‘The Seeds Inside (The Grapes Upon The Table)’ .

Rupert and Ruth also run the monthly folk club TOOTING FOLK, which has become a firm favourite on the London folk scene.