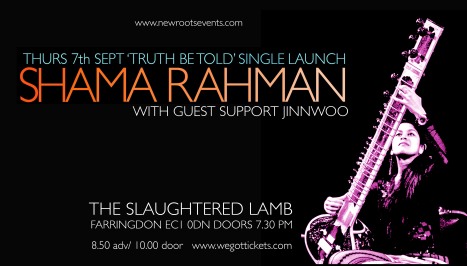 Composer, sitar-player, singer-songwriter, and multi-instrumentalist Shama Rahman launches her new single release and music video ‘Truth BeTold’ from her forthcoming album of the same name. Supported by the likes of Gilles Peterson, 6 Music, BBC’s Front Row, Channel 4’s Sunday Brunch and The Times, she and her electro-acoustic band take the sitar out of its traditional context and use it as the basis for compositions that range across an eclectic array of genres that include jazz, electronica, hip-hop, drum ’n’ bass, worldbeats, Indian/western classical melodies, folk storytelling and beat poetry.

‘Truth BeTold’ , recorded with live electronics and a 6-piece band, is pioneering as the first fully live album made using the wearable technology mi.mu gloves, which allow intuitive gestural control of music – Imogen Heap has recently been using the same technique. Shama recently hosted an immersive multimedia storytelling performance of the album at the Southbank, and has toured it in Hungary, Korea, and most recently in Antarctica with a performance on ice as part of the first ever Antarctic Biennale.

‘Love it All. Brilliant!’-Gilles Peterson, 6Music

‘Beautiful and intoxicating. I’ve completely fallen for this lady. I love it’ Michelle Hussey, BBC Introducing

‘…imagine Dead Can Dance and Björk getting together in a folk club, to make jazzy trip-hop records…with sitars.’ Songwriting Magazine

Brighton-based visual artist and singer-songwriter Jinnwoo‘s critically-acclaimed debut ‘Your Baby’ E.P. resulted in his being named one of The Independent‘s ‘Faces to Watch 2015‘. His long-awaited debut album ‘Strangers Bring Me No Light.’ was released on the much respected Cargo label on 2nd Sept 2016. The album features collaborations with Malcolm Middleton, Alasdair Roberts, Kami Thompson (The Rails) and Kylie La Grange. His sparse atmospheric folk-soundscapes, laced with ghostly string arrangements and his exceptional acoustic guitar work, offer a kind of ‘spooked’ ‘gothic’ folk that sounds like no other. ‘Strangers Bring Me No Light’ is nothing short of a seminal record and Jinnwoo a true original.

‘Jinnwoo’s gothic folk-croak is a confessional reel unspooling from his innards, a tale of circling doom‘ The Guardian

‘A rising talent in the folk world, Jinnwoo has been setting hearts ablaze with his off-kilter guitarisms and distinct, emotive vocals.‘ The Line of Best Fit