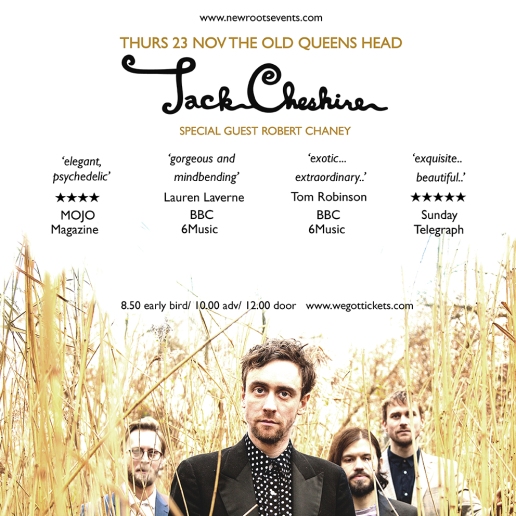 Jack Cheshire brings his 4 piece band to New Roots at The Old Queens Head. His contemporary alt-folk sound with a post-rock twist has led him to share bills with luminary peers Songhoy Blues and Josh T Pearson, and grace the stages of The Green Man Festival and Kings Place. The ghosts of Nick Drake and Syd Barrett skirt the edges of his songs, embellished by what Uncut magazine calls an ‘Ian McCulloch-style croon’, with a ‘burnished psychedelia [that] takes this music to the skies’. He released his 2017 album “Black Light Theatre’ to universal press and radio acclaim, making fans of 6 Music’s Lauren Laverne and Tom Robinson along the way.

‘…exquisite…dreamlike and beautiful..gets right under your skin‘. ✭✭✭✭ James Delingpole, The Sunday Telegraph

‘…beautiful stuff…An artist crying out for a bigger audience.’ The Sunday Times

‘..a burnished psychedelia creeps into the mix and takes this music to the skies.‘ Uncut

A rising star on the London folk scene, American singer-songwriter Robert Chaney counts Townes Van Zandt, Hank Williams and Judee Sill as influences. A remarkable songwriter with a voice to send shivers down your spine, sown deep into his songs are threads of the dusty blues of the 20s and 30s, pulp noir tales of the 40s, the cable-knit folk revival of the 50s, and the French celluloid new wave of the 60s. His recently released debut album ‘Cracked Picture Frames’ garnered high praise in the music press, with Folk Radio UK making it their featured album of the month.