The Rough Island Band will play two 45 minute sets, with a thirty minute interval in between. Music begins at 8.00 pm sharp.

The Rough Island Band are a contemporary folk quartet playing original music inspired by the landscapes, people and stories of the Isles of Scilly- a tiny scrap of wind-carved rock, gorsey downland and fine sand dropped 28 miles from mainland Cornwall, with a vibrant working community encompassed by the Atlantic Ocean. Their songs reflect the feeling that a community’s history and stories should be set and celebrated in music. Unusually for a Celtic outpost, St Agnes has no surviving indigenous music. Stories of shipwreck and rescue, tunes for dancing and evocations oflandscape have been written by the band in response to an extraordinary place.

Incorporating a wide range of instrumental and vocal textures, The Rough Island Band craft a personal and contemporary sound, firmly rooted in the folk tradition. The individual members bring together a variety of influences and experience: from performing as members of Bellowhead, The Spooky Men’s Chorale and the Maddy Prior Trio, to their own solo projects such as The Little Unsaid and Full of Noises. They also run folk festivals and events across the Scilly Isles and throughout the UK.

‘This Island of Yours…’ , the band’s fourth studio album, charts a deeply personal response to the islands. Submissions of poetry, photographs, stories and spoken word have been woven into the fabric of the album and collated as a physical scrapbook to accompany the recordings. Musically, this is their most ambitious and idiosyncratic to date, expanding their contemporary folk sound with echoes of electronica, jazz and ambient music. Recorded in their home studio on St Agnes over ten days in April 2017, the album captures a tangible sense of place and sense of space. press summary

For the ‘This Island of Yours…’ tour, The Rough Island Band will play 2 x 45 minute sets, performing music from the new album alongside highlights chosen from their first three albums: Sou’Wester Sessions (2010), Where To? (2011) and ‘On All Sides’ (2014).

Paul will be joined by very special guests Josienne Clarke, Jack Harris and Raevennan Husbandes (Moulettes) playing songs from across his career including his recent critically acclaimed folk opera ‘The Butcher’, his earliest work with harpist Tom Moth (Florence And The Machine), the snowy folk tales of the new WINTERTIDE EP and his next project coming 2018 ‘The Loneliest Whale In The World’.

Mosley’s previous adventures have taken in an Icelandic farmers choir, horror soundtracks, a suite based on bird song and music inspired by kids TV classic ‘The Clangers’ as well as tours with Shane MacGowan, Jamie Lawson, Eddi Reader and Neko Case.

His last project ‘The Butcher’ an epic folk opera introduced him to a new crowd of young folk musicians and fans with The Quietus calling it ‘A darkened folk masterpiece’ and Folk Radio UK and Resonance.fm both making it an album of the year.

‘What a voice’ Jools Holland

‘A darkened folk masterpiece‘ **** The Quietus

Support this evening comes from Robin Elliott. A key player in the London folk scene, Elliott’s songs have neen performed by Radio 2 Folk Award winner Ben Walker, Samantha Whates, and Sophie Jamieson amongst others. His work has featured in the feature film A Very British Gangster and on Channel 4’s much respected Cutting Edge series.
–

“Dreamy, deceptively lovely folk-pop that tickles the ear and softens you up for the thornier sentiments contained therein. Pretty as a California sunset. Gorgeously dusky singing voice and immaculate harmonies.” ROLLING STONE

In early 2016 London based duo Ferris & Sylvester‘s alt-country tinged fine harmony and superbly crafted songwriting caught the ear of legendary producer Youth (Paul McCartney/ The Verve/ Beth Orton). He invited them to to record at his studio in Spain, where they recorded their soon to be released debut EP, ‘Save Yourself’. Greenwich Village 1966 is a clear reference in their catchy folk sound, from the Lovin’ Spoonful to Mamas & Papas, with contemporary nods to the likes of Laura Marling and Conor Oberst completing the picture.

Genevieve Dawson is a singer songwriter originally from Edinburgh, now based in South-East London. She is currently studying composition at Goldsmiths University of London, following in the footsteps of esteemed alumni of James Blake and Rosie Lowe. She brings together a frank lyrical style with a warmth and soulfulness that inhabits the same alt-folk terrain as Laura Marling and Ani DiFranco. 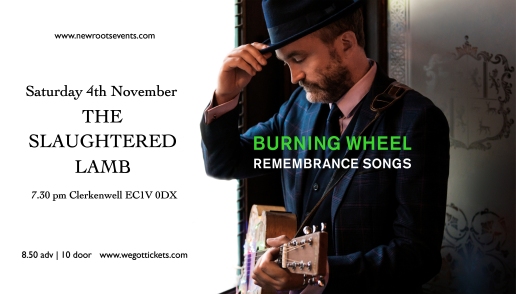 The nine tracks on Remembrance Songs were recorded with renowned producer Gerry Diver. Gerry’s recent work has included Lisa Knapp’s Till April is Dead – A Garland of May, which received a five-star-rated reviews in the Guardian and Mojo, and Sam Lee’s Ground of its Own, which was shortlisted for the Mercury Music Prize. The collaboration looks set to follow the artistic, critical and commercial success of Gerry’s previous projects.

Born and raised in Liverpool and an alumni of John Lennon’s Quarry Bank School, front-man EoinQuiery fuses the melodic sensibilities of his hometown with the poetry and storytelling of his Irish ancestry. Live on stage Burning Wheel comfortably mix Primal Scream and the Pogues with a huge dose of soul and come roaring out the other side with a visceral rock’n’roll show.

THIS VENUE SEATS 45, WITH AN ADDITIONAL 40 STANDING. TICKETHOLDERS PLEASE ARRIVE EARLY TO ENSURE A SEAT.

Nicki Wells, the exceptionally gifted singer and songwriter behind TURYA, takes inspiration from Indian classical music, which she studied as a teenager. The name comes from Turiya, a Sanskrit word, meaning a state of pure consciousness, the silence one experiences after sound. This influence is echoed throughout her new single ‘Falling’. Taken form her Nitin Sawhney produced debut album ‘Ocean’, TURYA’s uniquely original sound fuses elements of Western folk, roots and pop with clasical Indian foundations.

With influences rooted in her personal experiences, Nicki was born in South London, but grew up in the foothills of the Himalayas. TURYA’s vocal and songwriting approach is a cultivated collection of melodies, combined with uniquely captivating, bittersweet and moving vocals. It’s these elements that have shaped her ‘Ocean’ album.

TURYA describes her unconventional background, and how it impacted on her music ‘I grew up in Himachal Pradesh between the ages of 6 and 10, and just absorbed the sound, colours and culture of the region,’ she explains. ‘It was also very international – we were with kids from India, America, Australia, Austria, all different parts of the world. Growing up with so many different languages and accents, I became very open to different ways of communicating. That’s how my musical ear began to develop; listening to an array of different sounds and languages’

Singing primarily in English, TURYA’s music represents an artist who is vast in her range, and clear in her emotional appeal.