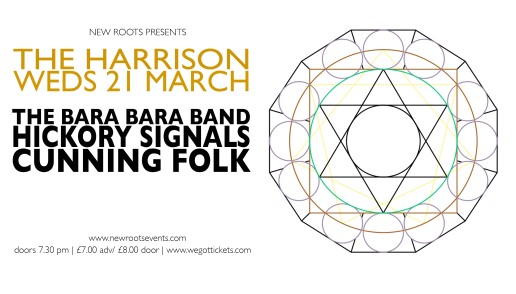 Based in South London and Bristol, The Bara Bara Band are a quartet that employ the traditional trio of banjo, guitar and fiddle, supported by cajon/drums & percussion. Playing a mix of their own songs and traditional folk songs and tunes, their stark delivery pulls on distinctly English strands, with echoes of ’60s Wyrd Folk and ’70’s punk informing their more traditional folk roots. They recently released their new album The Seeds Inside to favourable press acclaim.

‘Stick In The Wheel are the the forefront of [the new folk] – The Bara Bara Band are right up there too’ Jeremy Searle, R2 Magazine

“Listening to this music is an exciting experience. Clear and obvious roots of tradition feed its creation, with freshness of innovation… a heady mix that moves from ethereal through accusative to darkly observational” – Folkwords

“…This album… like all good traditional music, touches the air we breathe and greases the axles of our lives… it rhymes with the very best of new and old English folk music” – Soundblab