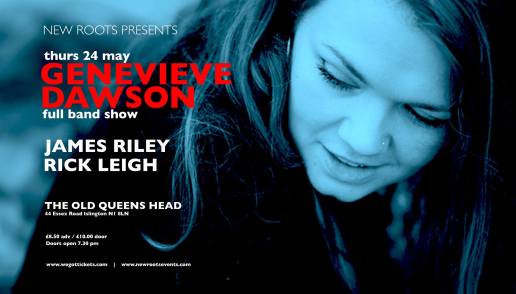 Genevieve Dawson is a singer songwriter originally from Edinburgh, now based in South-East London. Bringing together a frank lyrical style with a warmth and soulfulness that inhabits the same alt-folk terrain as Laura Marling and Ani DiFranco, her rich and sophisticated sound pulls influence from jazz and folk in equal measure. She has recently completed studies in composition at Goldsmiths University of London, following in the footsteps of James Blake and Rosie Lowe, amongst many other esteemed alumni. She plays tonight backed by her full band.

The product of Anglo-American parentage, James Riley grew up in South East London listening to the folk and soul sound of 70s America and wrote his first melody at the age of four. In his early twenties, he took off hitchhiking and busking through Europe from Amsterdam to Istanbul, writing songs along the way. Back in the UK, these songs became a band, only to change once more, with James’ wandering spirit taking him to Nashville, Tennessee. Here he found his producer and they set about making the album which had travelled with him to his maternal homeland, where it could finally get free.

Rick Leigh is a multi-instrumentalist, singer and songwriter from Lancashire who now resides in London. His music combines 3 part vocals with delicate keys, guitar and horn arrangements. In a live setting Rick works in a trio of multi-instrumentalists bringing together a huge variety of sonic elements from keys, guitar, bass, vocals, drums, saxophone and Flugelhorn. He has recently been named on Glastonbury’s 2017 Emerging Talent Longlist. Described as ‘A beautiful cacophony of instrumentation’, Rick’s live show is an intimate and delicate experience taking influence from Sufjan Stevens, Fleet Foxes and Grizzly Bear. Outside of his own project Rick has performed and worked with whole host of artists as both a singer and trumpeter including Alison Moyet, Denai Moore, Sam Lee and Luke Sital-Singh.