“The finest country rock band on the planet” – MOJO / “A superb ensemble with a serious pedigree in California’s roots-rock scene.’ Uncut

June 2018 will bring a new CD release from Southern California’s leading country-folk-rock band I See Hawks In L.A.: “Live And Never Learn”. The Hawks are noted for their lyrical celebrations and lamentations of earth and ecosphere, odes to the endless highway, and wry social commentary. They’ve gathered a loyal tribe around the globe, from many U.S. And European/UK tours, consistently rave reviews from critics, and a serious presence in the top 10 of the Freeform American Roots chart (#1 three times), the Americana Chart, and the Euro Americana chart (top ten several times).

They bring their four-piece acoustic incarnation to the Green Note for this very special two-set performance- don’t miss this superb incarnation of genuine LA country-rock royalty!

‘If the Eagles in their Hotel California heyday represented the Orange County picture everyone believed, I See Hawks In L.A document the reality of the 99%, set to a soundtrack of weeping guitars and three part harmonies’ Shawn Underwood, Twangville

‘I See Hawks in L.A. are California Country Rock gentlemen. They have a literary sense to their songs that equals American writers from the South (Faulkner), the West (Twain, O. Henry) and the East (Poe). Their music reflects the moods and emotions of the songs characters as much as the men behind the curtain that pulling the strings and writing the word…..The Hawks are a rock band with a Roots accent’. The Alternate Root 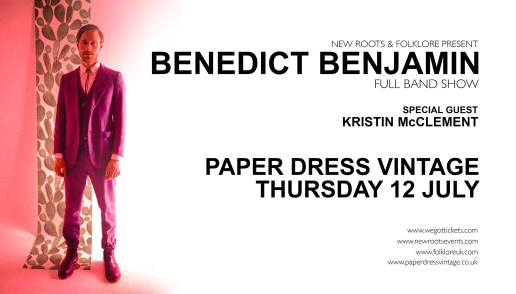 Appearing with his full band, Benedict Benjamin is Ben Rubinstein, formerly of The Mariner’s Children and Peggy Sue (Wichita Records). His debut album ‘Night Songs’ is a collection of timeless compositions recorded in a series of churches, bedrooms and kitchens across London and Kent with producer Dan Blackett (Landshapes, Bella Union). Benjamin is first and foremost a songwriter versed in the classic traditions of the form, capable of crafting both operatic crescendo and lullaby-like stillness, shot through with the heartbreaking swoon of Roy Orbison, the soothing harmonies of the Everly Brothers and the honesty of Jeff Tweedy. His songs undercut the dream-like beauty of early 60s pop music with lyrics both frank and poetic. In September 2017 he and his band played the prestigious Green Man Festival. His forthcoming second album will be released in 2019.

Kristin McClement’s music is born of two separate worlds; the vast shape shifting landscape of her childhood South Africa and  the melancholic romance of old England’s sacred woodland, rivers and valleys. Her’s is a a sound that captures the wide-eyed rendering of modern folk song, where the acoustic and the electronic rub alongside, influenced as much by visionary artists PJ Harvey and Portishead as by the conventional folk sounds of Leonard Cohen and Nick Drake. Her ‘Wild Grips’ album, produced by Christian Hardy of The Leisure Society, is described by Gold Flake Paint as “inventive, weighty pop music which dazzles, shimmers and glows exquisitely in the cold light of the day.”

Laura Frances is a haunting new voice in UK alt-folk, with a startling depth and a richly intense tone that instantly marks her out as one to watch, a unique new addition to the folk world . A dark, contralto Joni Mitchell, her songs are delivered with a refreshing brevity, wrapped in a cloak of misty melodies from a world rich in mystical imagery, where everything is half-hidden. She plays tonight with her full 5-piece band.

Described by Folk Radio UK as ‘the missing link between Nick Drake and ‘Space-Oddity’-era Bowie’, singer-songwriter Jeremy Tuplin has released two EPs and a debut album, ‘I Dreamt I Was Astronaut’ (released on Folkwit Records in September 2017).

“A distinctive, deep vocal that has hints of Leonard Cohen and Bill Callahan” The Telegraph Culture 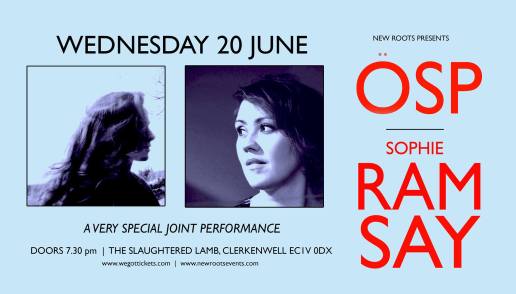 Hailing from a valley in the North of Iceland, Ösp Eldjarn makes music that both reflects the folk songs of her native country, and absorbs the artistry of contemporary London songwriting. She carries with her a fine Icelandic tradition of soaring melody, songs of glacial beauty and striking emotional power. Ösp’s debut album was released earlier this year, attracting the attention of respected critics and DJs, including rave reviews from Iceland’s leading music writer, Arnar Eggerts and Indie Rock Mag. Ösp has performed at major festivals including Cambridge Folk Festival and Iceland Airwaves. She comes from a famously musical Icelandic family and before starting her solo career, released two successful albums with her brother from the band Brother Grass. She will be performing songs from her album,Tales from a poplar tree, together with Italian born violinist singer/songwriter and multi instrumentalist Valeria Pozzo.

Sophie Ramsay combines old and new folk, singing songs from her native Scotland alongside originals with freshly poetic lyrics and European folk influences: her 2013 album ‘The Glassy Mountain’ was described as ‘undeniably beautiful’ (fRoots), ‘Joanna Newsom meets Belle and Sebastian’(R2), and as ‘timeless, outstanding… for those who really hear a song‘ (Folk Music Worth Listening To). 2016 saw the release of her album of old Scots and Gaelic Songs ‘The Seas Between Us’: ‘Atmospheric, elegant and beguiling, hers is an exciting new voice to carry Burns onwards.’ (Songlines). ‘Ethereal beauty translated into song’ (Folk Words) ‘Deeply moving’ (fRoots). Sophie accompanies herself with nylon string guitar, viola and recently occasional electronics. She has been touring the Scottish Highlands a lot recently with cellist/singer Sarah Smout, and is a member of respected folk group Mediaeval Baebes. Her voice opens the double Emmy nominated theme music for ITV’s Victoria.

Molly’s Lips (a.k.a. Billy Glinn and Phil Self of Cocos Lovers,The Hellfire Orchestra, Will Varley) have been working hard these past few years. Their first release was recorded in their kitchen and printed up totally by hand. They’ve stepped it up for this release; drafting in Joel Magill (Syd Arthur) to record it and getting stellar musicians such as James Gow (Knee High, Lunch Money) and Raven Bush (Syd Arthur, Kate Tempest, The Gaslamp Killer) to play on it.

Along with the expected guitars, harmonies and strings this release sees the addition of reed organs, synths and live electronics to create a blend of atmospheric acoustic and electronic sounds.

Laura Frances is a haunting new voice in UK alt-folk, with a startling depth and a richly intense tone that instantly marks her out as one to watch, a unique new addition to the folk world . A dark, contralto Joni Mitchell, her songs are delivered with a refreshing brevity, wrapped in a cloak of misty melodies from a world rich in mystical imagery, where everything is half-hidden. She plays tonight as a three piece, accompanied by backing vocals and violin.