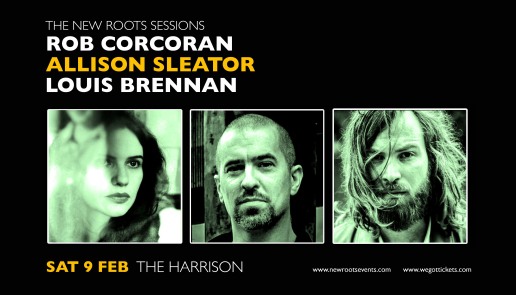 Dublin troubadour Rob Corcoran has sailed the high seas of love, heartbreak and excess, and (so far) lives to tell through his gripping, visceral persona. His lyrically compelling, beautifully observed songs are drenched in Celtic soul, drawing from the same deep wells that serve Van Morrison, Mike Scott and Liam O’Maonlai so well. One of Corcoran’s recent compositions ‘Ringing That Bell’ is being performed by the legendary Christy Moore as part of his current touring set.

“I implore you check him out, don’t let me down… this guy is rather special.” Americana UK 9/10

“From the moment he steps on stage, Corcoran perspires authenticity in that fluent way that a hundred record execs have tried and failed to manufacture”. Anne Frankenstein: Jazz FM (UK)

Allison Sleator is a contemporary folk singer. Across her career she has performed and collaborated with many legendary figures in the Irish folk world , from Donal Lunny (Moving Hearts, Planxty, The Bothy Band), to songwriter Declan O’Rourke, and giants of Irish music The Chieftains amongst many more. In addition, she has spent the last three years exploring South American folklore and music, and currently blends strands of contemporary songwriting, traditional folk and Peruvian musical magic into her set. She is a strikingly unique artist with a singular vision, a true musical original – definitely not to be missed.

London based Dubliner Louis Brennan is a singer-songwriter in the folk tradition. His folk however aren’t the field hands and travelling minstrels of yore but the repressed middle managers and ennui-ridden urbanites of late stage capitalism. They populate tales of bad sex, half-drunk commutes and interpersonal claustrophobia delivered in Brennan’s cracked baritone, at times intensely intimate, at times broad, peppered with pitch-black humour.

“A master storyteller with a voice like rolling thunder” GQ