Hi folks- here’s what’s on the way over the next two weeks for New Roots. On Wed 17 this week we’re at the Green Note with HEARD Collective, a four-way feast of music featuring Daisy Chute, Cerian, Martha Paton & Elisabeth Flett, and we stay at the Green Note on the following day, Thurs 18th April, for the sublime Whiskey Moonface. On the 26 April we’re at The Harrison for a great double bill, Ady Johnson (featuring John Parker from Nizlopi) and Matt Owens (Noah & The Whale), and we return to The Harrison on Fri 3 May for Laura L’Olive‘s full band show, with support from Gus White. We finished back at The Green Note on Sunday 5 May with the joyous, superbly soulful Dai & the Ramblers. All tickets and details below, with lots more gigs for April, May & June up at the new roots website, dive in! 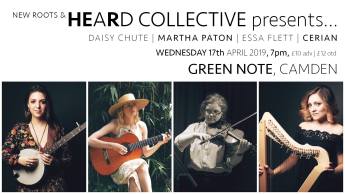 Doors open 7.00 pm, music from 8.15 pm. The venue is comprised of both seated and standing areas- please arrive early to ensure a seat.

HEARD Collective promote and support women in music, putting on all-female line-ups as they try to redress the balance of under-representation. For this special event HC present a showcase of four brilliant female songwriters and artists: Daisy Chute, Martha Paton , Elisabeth Flett, and Cerian.

Award-winning artist Daisy Chute is a folk songstress, multi-instrumentalist and regular on the London music scene. Formerly of Decca’s platinum-selling classical group All Angels, she is currently working on her début album of original songs with producer and songwriter Tim Baxter (Andy Burrows, Editors, Nick Mulvey). She is mentored by songwriting rock royalty Ray Davies (The Kinks) and is one of Paul Sexton‘s ‘top music tips’ for 2018, with comparisons to Laura Marling, Simon and Garfunkel and Joni Mitchell’ (BBC Radio Kent).

London singer-songwriter and multi-instrumentalist Cerian has been described as “the purest voice on radio” (BBC) and selected as one of Music Republic Magazine’s “ones to watch” in 2019. Across her career to date she has sung with U2, Radiohead, Thom Yorke, Sam Smith, Imogen Heap and Charlotte Church amongst others, and is now taking on the world with her own brand of contemporary, ethereal, folk-pop. Classically trained in voice, harp, piano and guitar, she has been described as a cross between Kate Bush, Joni Mitchell and London Grammar, weaving together soaring melodic vocals and rich harmony with poetic lyrics.

Martha Paton is a South London-based singer and writer of chocolate-box songs about the city, suburbia, and how doomed we all are. Born in Hampshire and raised on the pop excesses of the 90s and early 00s, she now specialises in folk and country-infused pop that takes its cues from Laura Marling, Regina Spektor, Margo Price and First Aid Kit.

Doors open 7.00 pm, music from 8.15 pm. The venue is comprised of both seated and standing areas- please arrive early to ensure a seat.

To describe Whiskey Moonface as an alternative folk group doesn’t even begin to do justice to the breadth of inspiration and style in their music.

Based around double bass (Dakota Jim), accordion (Louisa Jones) and clarinet (Ewan Bleach), they’re led by Jones’ superb vocals and hallucinatory lyrics. Capable of being both ear-to-ear-grinningly entertaining and profoundly moving, they combine elements of  old-time New Orleans jazz, Eastern Europe folk music, the baroque/ chamber folk styles of the likes of Sufjan Stevens and Beirut, and the bacchanalian spirit of Tom Waits with their own unique take on contemporary roots music, to make for a superbly realised, truly beautiful, and utterly original sound.

There is simply no-one in the UK making music like Whiskey Moonface. 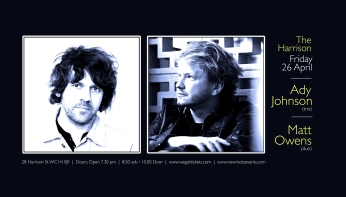 “One of the UK’s most inventive songwriters” Stephen Foser – BBC Radio Suffolk.

“…might well be the first contender for album of the year…deserves to be massive.” 9/10 Press Association

British singer-songwriter and musician Matt Owens came to prominence as one of the founder members of indie-folk band Noah and the Whale, and went on to front rock’n’roll band Little Mammoths.

Fri 3 May: Laura L’Olive with support from Gus White 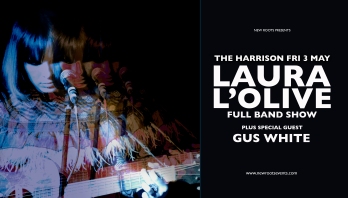 Laura L’Olive is a striking new voice in UK alt-folk, with a startling depth and a richly intense tone that instantly marks her out as one to watch. The deep vulnerability in her lyrics and unique vocal style is juxtaposed by lush layers of dreamy guitar, captivating and transporting the listener. Laura’s debut album is set for release in the summer of 2020, and she plays its songs tonight with a new 4-piece band.

Growing up in a small village in Wiltshire, Gus White began his career as a choir boy, discovering his passion for music at an early age. He studied Sonic Arts at Queen’s University Belfast and Popular Music at Goldsmiths University of London. He has been greatly influenced by folk artists such as Joni Mitchell and Nick Drake, and by the countryside in which he grew up, contributing to his particularly English and pastoral sound.

Please note, the venue consists of both seated and standing areas. To ensure a seat, please arrive early.

“I love his voice; I love the whole band.” Paul Heaton (The Beatiful South)

“Righteous and loose… contagious and worth spreading” Alan Cackett (Maverick)

Coming up in May:

Fri 10 May: Gem Andrews plus support at The Harrison, Kings Cross.

Tues 14 May: Stevan Murphy & the Athletes of Soul with support from Rob Corcoran / Cairan Dwyer at The Slaughtered Lamb, Clerkenwell

Weds 15 May: Solasta at The Harrison, Kings Cross

Thurs 16 May: James Riley (full band show) with support from Our Man In. The Field at The Green Note, Camden

That’s all from New Roots for now– if there’s anything more you’d like to know please drop me an email to newrootsevents@gmail.com. Cheers! Rory.