‘ Genevieve Dawson’s songwriting knows no upper bounds…see her and her band at any opportunity you get’. Bittersweet Symphonies. 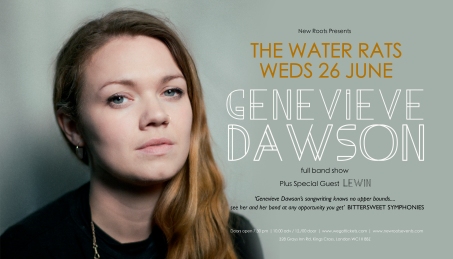 Singer-songwriter Genevieve Dawson is originally from Edinburgh, now based in South-East London. Growing up on Joni Mitchell and Ella Fitzgerald, she went on to study music, playing and singing in jazz and folk bands across Europe and the UK. After a period spent living in Cairo and Morocco she returned to London, completing her studies at the iconic Goldsmiths University. Bringing together a frank lyrical style with a wonderfully rich and soulful tone, Genevieve Dawson’s sophisticated sound, supported by a superbly accomplished four piece band of keys, horns, bass and drums, pulls influence from jazz and folk in equal measure.

‘ [She] blends folk-roots with spicy infusions of off-kilter improvisation and ambitiously ambiguous harmony. Genevieve’s take is not unlike that of Hejira-era Joni Mitchell- her songwriting knows no upper bounds…see her and her band at any opportunity you get’.  Bittersweet Symphonies.

‘Lewin’ is the fresh musical leaf that has been turned by songwriter and musician Jara Holdert, formerly known as ‘JARA’. Her debut album, recorded in Haarlem and Berlin and scheduled for release in 2019, is full of the indie-pop warmth of the sixties and seventies, ranging from full-band arrangements to stripped down, intimate solo recordings. The first first single from the album, ‘Leather Jackets’, was released on The Toucan & The Elephant Records in February 2019.