Hiya folks – we’ve got a fantastic run of unmissable gigs for you from the 31st Oct to Nov 5th, it’s an embarrassment of musical riches! First up on Thurs 31st Oct The New Roots Boutique hosts Our Man In The Field, Laura James and Hugo M Hardy, three fantastic ensemble acts for just £7.00 in the legendary Betsey Trotwood in Clerkenwell. On Nov 2 Hannah Nicholson launches her latest EP with full coral accompaniment, plus support from Nick Dudek, at The Harrison in Kings Cross, and on Sunday 3rd the sublime Mesadorm are at The Lexington, plus support from Genevieve Dawson (with full band). We finish up at The Green Note on Tues 5th Nov with album-of-the-year candidates The Rail Abandon with their joyously brilliant West Africa meets Western folk & psychedelia mix. That promises to be an incredible night, definitely one for the diary. All details, youtube videos, and ticket links below, dive in!

New Roots presents THE NEW ROOTS BOUTIQUE, a brand new night UPSTAIRS in the legendary Betsey Trotwood celebrating the very best in new and upcoming contemporary roots and alt-folk artists and bands. With three ensemble acts on one superb triple bill, we ask that all attending stay for the full line-up – the night’s intention is to introduce musicians and artists to each other’s audience , and to introduce the audience to great new artists. We’ll also be asking for no talking during performances, and for social media devices to be switched off so the music gets the full attention it deserves!

You could be forgiven for thinking you’ve heard Our Man In The Fieldsomewhere before. He records live with his band just like the best of his influences; Neil Young, Van Morrison, Credence Clearwater Revival, Ryan Adams and Wilco. His own sound is undefinable yet familiar, and has been compared to modern day artists Ray LaMontagne, Damien Rice, Foy Vance and Joe Purdy. He has assembled a band of the finest players and together they give a deeply personal yet wholly cathartic performance, like an off the record admission from you to yourself.

After many years spent playing in different bands, working on records with David Gray, Caro and more, sharing studios with members of Elbow, Hugo M. Hardy’s latest musical incarnation is an exploration to the core of his evocative songwriting. Having lost loved ones and moved away from a familiar home, Hugo locked himself away in the French Alps with nothing but a guitar, a laptop, and music from Kanye, Sufjan Stevens and James Blake. By the time he brought himself back to the UK, he had written and recorded his debut album. A combination of carefully crafted acoustic and electronic production alongside thought-provoking, introspective lyrics create an atmosphere that has been likened to Elliott Smith, Bon Iver and The Microphones. 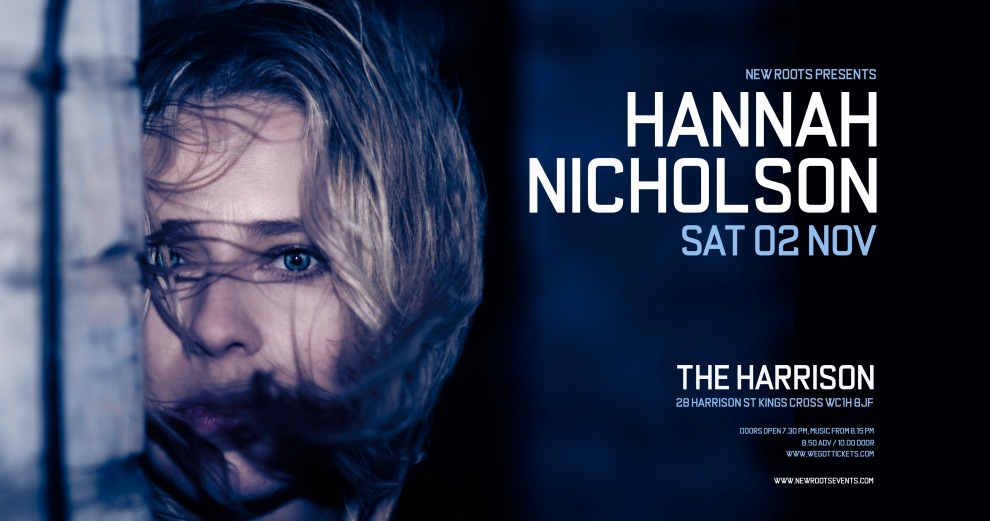 Blending soulful melancholia with the controlled artistry of a classically trained singer, Hannah Nicholson gives voice to the light and dark of the human condition. Having previously performed as one half of the Manchester based psych-folk duo Bird to Beast, coupled with her extensive session work – including Maz (Snarky Puppy) and Ellie Goulding– she has gone on to create her own individual musical identity: a blend of choral, electro and folk, stitched together with a thread that runs from J.S. Bach to Judee Sill and Jane Weaver. Her Saturday 2 Nov Harrison show marks the launch of her beautiful new EP ‘Object’.

Hannah’s sophomore offering is unshakably stubborn in its pursuit of harmonic beauty; ethereal melodies wind around a marriage of piano and synthesisers, supplemented with unconventional sounds, found sounds, layered ostinatos and samples, creating a sonic palimpsest to entice the ear and entrance the soul. The percussive voice of an African Kora entwines itself with her angelic vocals in ‘Clay Bird’; in ‘How’s the Weather?’, the delicateness of a German music box punctuates the upper registers, echoing behind the emotional poignancy of her lyrics. A singularly exciting new artist, Hannah Nicholson is a powerfully individual voice- a lighthouse in a crowded sea of UK singer-songwriters. Don’t miss her.

“[Mesadorm’s] Heterogaster is the best album of [the year] so far….quite remarkable” – Rich Pitt, BBC Introducing

After a period testing the mainstream stage with a major record deal as part of London Art Pop trio Vaults, Blythe Pepino has moved back to her roots as a leftfield rock and electronica songwriter. Pulling on wide strands of influence, from the contemporary electronic sounds of Caribou, Grizzly Bear and Sylvan Esso, to the late 60s and early 70s folk and pop giants Carole King, Neil Young and Joni Mitchell, the songs on Mesadorm’s brilliant debut album ‘Heterogaster’ are based around ideas of family, sex, trust and disconnection, and come drenched in rich vocal harmonies and beautifully layered textures.

“I’m absolutely addicted….really affecting and beautiful. One of my favourite tracks at the moment – I’m very excited to to hear more of them”– Lauren Laverne BBC 6 Music

“Melodies that originate in the left field… soothing, genuine, and perplexing… a real jewel.” – Clash Magazine

“Sublime… we’re enthralled by Blythe’s words and Mesadorm’s intense sounds.” – Get In Her Ears

“Mesadorm have that uncanny ability to find that perfect line between pop and experimentation. They achieve a rare and colourful psychedelic minimalism that is strikingly engaging.” – Folk Radio UK

Singer-songwriter Genevieve Dawson is originally from Edinburgh, now based in South-East London. Growing up on Joni Mitchell and Ella Fitzgerald, she went on to study music, playing and singing in jazz and folk bands across Europe and the UK. After a period spent living in Cairo and Morocco she returned to London, completing her studies at the iconic Goldsmiths University. Bringing together a frank lyrical style with a wonderfully rich and soulful tone, Genevieve Dawson’s sophisticated sound, fleshed out with a superb band of drums, piano, double bass, guitar and flugelhorn, pulls influence from jazz and folk in equal measure.

‘ [She] blends folk-roots with spicy infusions of off-kilter improvisation and ambitiously ambiguous harmony. Genevieve’s take is not unlike that of Hejira-era Joni Mitchell- her songwriting knows no upper bounds…see her and her band at any opportunity you get’.  Bittersweet Symphonies. 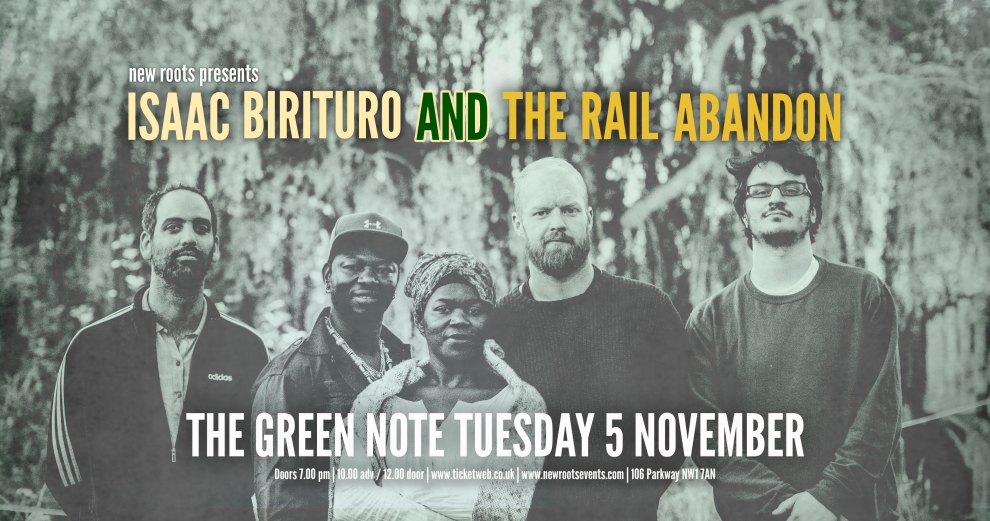 In 2016 Sonny went to Ghana and met master xylophone player Isaac Birituro. After an instant music connection, they spent 3 days in a church making the basis of the album Kalba. Sonny then called upon musician friends, such as Polar Bear’s Seb Rochford, Leafcutter John and Mark Lockheart as well as Laura Jurd, Elliot Galvin and Samantha Whates, to produce “one of the most exciting things I’ve worked on in the 20 years of the label,” – Dom Servini, Wah Wah 45s.

The album is a collaboration between Ghanaian and UK songwriters, recorded by 28 musicians from around the world, a mixture of traditional Ghanaian xylophone music, British folk, Afrobeat, Highlife, electronica and a whole lot more.

Incorporating new members on trombone/synth (Raph Clarkson), drums (Yuval Wetzler), vocalist Yolanda Eyama and master balaphone player Moussa Dembele, The Rail Abandon will be touring the music from Kalba as a five-piece recreating the sound of 28 musicians on the album.

That’s all from New Roots for now– if there’s anything more you’d like to know please drop me an email to newrootsevents@gmail.com. Cheers! Rory.